So here’s the story of our first baby girl, and the journey she went on at birth. More than any other emotion, I am grateful. For Quinn, for her life, and for the fact that she is now doing incredible. I simply want to share her story because it has forever changed me and of course our family as well. It has taught me invaluable lessons and opened my eyes to a lot of things too. It has made me grateful.

When I found out I was pregnant in December 2014 I was NOT exactly thrilled. We’d only been married a little while, and we were being very careful not to get pregnant. Insert joke here about that not working out.

But of course, after the shock wore off and 9 months went by, Timmy and I were in love with our little girl. We prayed over her every night while she was in my belly, sang her the special Moon song we made, and felt prepared to be a family of 3.

Quinn’s due date came, August 4th, and that little punctual stinker came with it! Born at 2:13 am, she came into the world by a peaceful water birth at the birthing center in our town.

My birth story. If you’re into that sorta thing is on the blog as well 😉 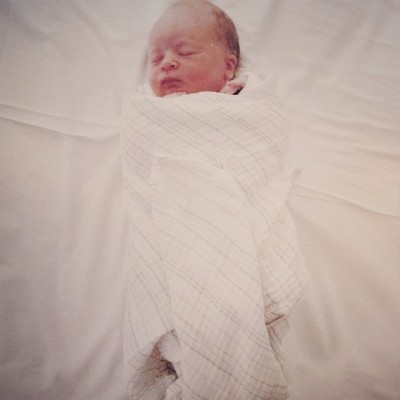 She screamed. Cried. Even smiled. She nursed for 45 minutes and drank it all. The nurse and midwife examined both Quinn and me multiple times over the first 4 hours and then cleared us to go home. To them, there were no meds involved and we both showed excellent vital signs.
[You can hear my hindsight thoughts on the birth center type of care.]

We were sent home with our new bundle. We slept for a few hours with her right next to our bed. 3 hours of sleep later, we began our first morning with our newborn. But something was wrong. And we didn’t know what….

A few hours after being home, Quinn was limp, fussy, and barely able to open her eyes. And at first we thought maybe she was just sleepy or hungry. But she wouldn’t eat. Over the course of the next hour as we tried everything we thought a newborn could need, her fingernails and skin started turning an odd shade of grey and blue. We knew something was seriously wrong. Her breaths became rattles, and we jumped in the car and rushed to the ER. I sat in the back patting her chest to keep her awake… And I can’t even tell you the amount of fear and heartbreak I felt as I watched the new life I had just given birth to slip away.

When we got to the ER with Quinn it was honestly like a scene from a show. So many people in the room trying to stabilize her and figure out what was causing this and why she was dying literally right in my arms. They took her from us to try IVs, xrays, Chest tubes, and to intubate her [put a breathing tube down her throat], and we didn’t hold her again for almost 5 weeks. Our hearts shattered as we watched her struggle to live. There’s not a way to describe that feeling, your child suffering and you not being able to save them.

By the time Quinn was one day old, she was on the most invasive, the most last-ditch effort machine you can possibly be put on: ECMO. It is heart and lung bypass, essentially life support. It worked in place of Quinn’s heart and her lungs, keeping her alive while giving her body the opportunity to try and heal. It’s used for severe lung and heart failure and/or damage. It has huge risks involved, but the doctors told us that if we didn’t go forward with ECMO, Quinn would not survive. She underwent blood transfusions, xrays every day, blood draws through her central line, you name it.

Nobody could even tell us what exactly went wrong with Quinn’s lungs because it was all so horrible looking inside. The best explanation we all had was somehow Quinn had silently aspirated at birth [basically breathed in liquid] and didn’t show signs of it until hours later. The aspiration caused severe pneumonia, which caused her lungs to just basically collapse and go to crap.

10 days on ECMO and we were still not sure if Quinn would survive without the machine. But we took her off the machine knowing that if we didn’t take her off, the chance of a brain bleed or damage would be too great.

Quinn had a hard time the first week or so off the machine. There were so many ups and downs, and moments when we thought we were in the clear, only to be devastated again when Quinn would tank or have a bad day.

We sat in her room, staring at her heavily sedated little body, and just prayed. Sang. Laughed to keep our moods up. Cried. Cursed. Praised God despite the storm. Kissed her. Encouraged her. Whispered to her that she was going to be okay.

To make the LONGEST STORY EVER somehow shorter, Quinn remained on two different ventilators until about 4 weeks old. Then had oxygen support until 5/6 weeks old. She remained on many heavy medications until that time as well. She fought through withdraw from medications, she fought hard to learn to breathe on her own again, she continually surprised doctors with her strength and resilience. Although some days it seemed like she was giving up, she always pulled back around and kicked ass.

9 weeks total, we spent in the NICU with Quinn. Compared to a lot of people’s stories with their precious babies, that is hardly any time at all. To us, it was an eternity as we pulled for Quinn to make it. And being in the NICU for 64 days, we saw a lot of babies and families go through many horrible things, and honestly the fact that we brought our baby home is a miracle. One we don’t go a day without thanking God for. We still say prayers for the sweet families we met in the hospital who had to say goodbye to their precious ones.

At 9 weeks old, we finally got to take Quinn home! The bravest, most resilient little girl in existence. She now breathes on her own. She is hitting every single milestone, and there are no signs at all of any brain damage from all the trauma and sickness. THAT is also a huge deal!

Quinn is fed through a G-tube still, a feeding tube that is surgically placed into her abdomen, because of her aspiration and because of all the time she spent in the hospital where she couldn’t eat by mouth. So we are still in feeding therapy and working hard to teach her while making sure she’s being fed and growing well. We don’t know how long the feeding tube will be around, we hope not long! But right now, we are going at Quinn’s pace and we are okay with that.

The amount of support we were given through this entire year has been overwhelming. The Facebook group, the people from our church(es), friends from work, family, past and present friends…we can’t thank you enough. Your love carried us through, I hope you know that.