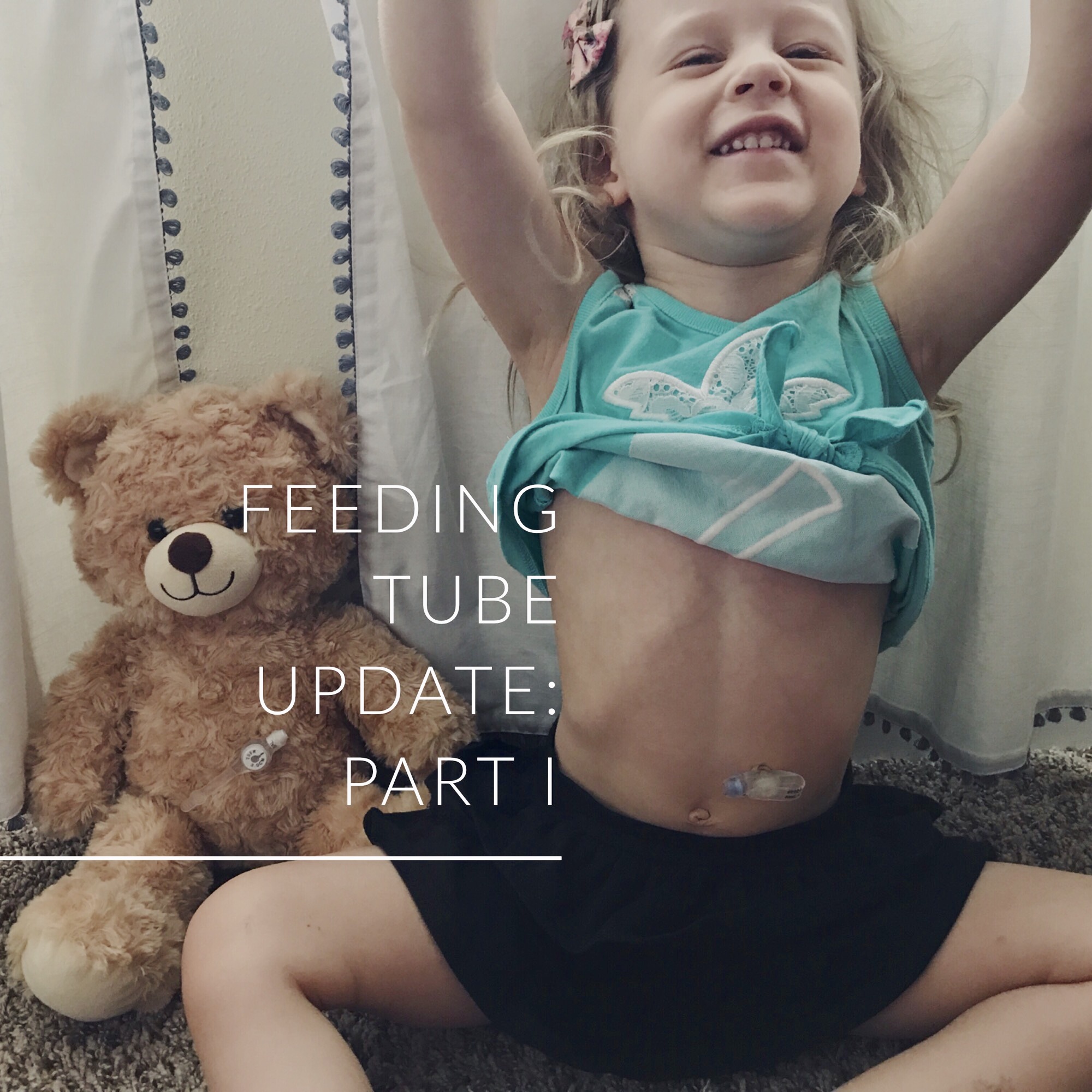 This is my freaking cute kid, my little Quinn girl! Here’s an update on how things are going with her feeding therapy and her G-tube {who she calls “Buddy”}.

Today was our last day at High Hopes therapy center for kids in Nashville (because we are moving, more on that later.) and I’m having ALL the emotions.

We have been seeing Quinn’s speech pathologist, Lori, at High Hopes for a year now. It’s been the biggest blessing imaginable. Lori has walked us through many ups and downs and frustrations. The first day I met Lori I probably looked like a living psycho because I cried a lot and had no idea what to expect. But man! She and Quinn just connected immediately. Quinn has made more progress with her swallowing and eating this past year than we ever could have imagined, so I’m sharing that now 🙂

Before we came to Lori we had been through 4 different therapists for Quinn’s swallowing disorder/aspiration/feeding issues. We had even been admitted to an in-patient feeding program at one point, and THAT was disastrous.

I was admittedly feeling hopeless a year ago, wondering if there was someone who could even help us at all. Quinn was crying, fighting, and having extremely high anxiety around any drink or food item that we or any therapist would try. Her aspiration (liquids/food going down the trachea instead of down the esophagus like it’s meant to) was still lingering and causing issues at every turn. Every therapist we tried either told us they weren’t sure how to help Quinn or they worked with her for a while only to tell us that she wasn’t progressing. Some of that had to do with Quinn being so young and needing more time to get stronger, but some of that was also just needing to find the best person for the job. And we sure found that at High Hopes. We are SO sad to be leaving Lori, and we’re praying we get connected to someone for this next stage who can continue working with us. And who will love Quinn as much as “Miss Glori” has! 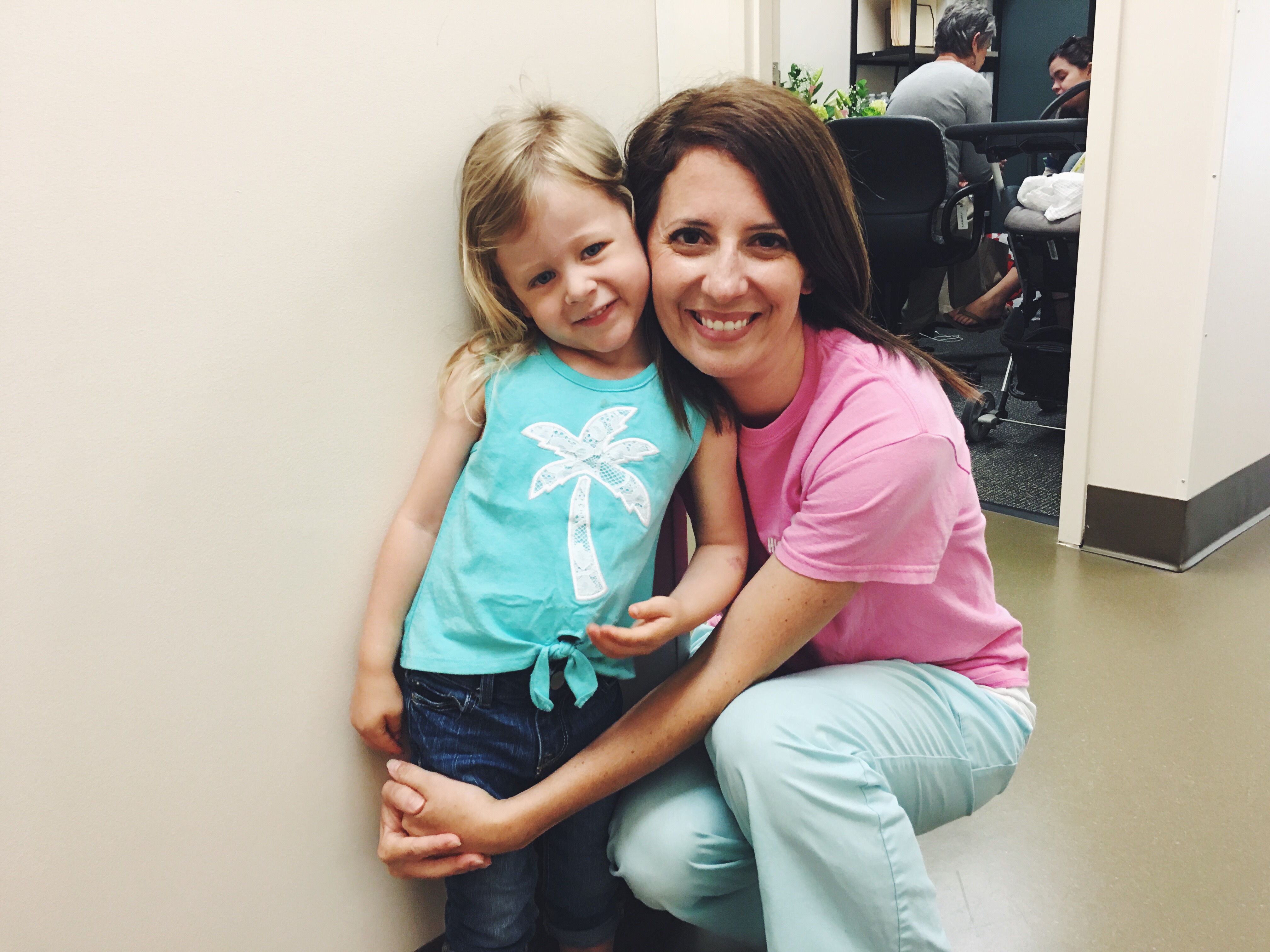 {No idea why Quinn called her Glori instead of Lori. But it is adorable.}

Her Next Steps…. A Tube Weaning Journey

After a long year of uphill climbing, Quinn has reached the point where her therapist and all of us think that all she needs now is a final push to get her past this last hump. Quinn is almost 3, so let’s be real, soooo much of what she’s dealing with now is simply toddler behavior. But also, sweet girl has only known her tube for her entire life. She’s never known a day without it. And truthfully, neither have I. It has become so normal to us, such a part of how we’ve done our life, that she has become dependent on it. It’s like a crutch.

She knows that her tube gets fed if she doesn’t eat. So a lot of her just feels unmotivated. I would too if I were in her shoes I bet!
{OK. Maybe I wouldn’t. I love food so much I would marry it. I don’t understand anyone who looks at a plate of food and goes “nah, better not.” I have fourth meal every day. So scratch my empathy}.

This exact interaction often happens at meals where she’s struggling:
Me: “Quinn, it’s time to take bites and feed your tummy, or I will have to feed buddy with the tube.”
Quinn: “Mommy, just put it in the tubie, I don’t want this food.”
Me: *she has morphed into a smarter species….must change tactic…*

The thing is, Quinn has been cleared medically of any issues holding her back from eating and drinking. This tube dependency is nothing other than just that now…she has proven that she can do it! We just need a team that can help us navigate the best way to wean her off the tube safely and without causing damage emotionally, physically, or psychologically. Because tube weaning without medical supervision can turn out BAD and be quite dangerous.

This is where Cincinnati Children’s Hospital comes in! We’ve been referred there by her pediatrician and therapist, who both think the Tube Specialists there can walk us the rest of the way. This involves an overnight stay in Cincinnati NEXT WEEK! And a long, long day of observing Quinn, meeting with the team, and getting their thoughts and their plan into place. If they think she’s ready, that is…we are praying so hard that she is. We don’t want to push this too early and risk all the progress she has made. So we covet your good thoughts and prayers our way as we look into all of this for Quinn.

We travel to Cincinnati on Monday, stay the night, and spend Tuesday at the hospital with their Feeding department. We don’t know tons of details, but we do know that it could be the beginning of a whole new world for her and us.

We also know that, in order for her feeding tube to come out, Quinn has to go 6 straight months without needing it at all. This means 6 months of eating and drinking all she needs without losing weight at all. In fact, she has to show a normal pattern of growth during that time for the doctors to agree that she is ready to be tube free. So it’s still a long process BUT we are closer than we’ve ever been!!

She’s probably consuming, on average, around 75% of what she needs to on a regular basis. So close I can almost taste the tube-freedom.

So. That’s about it for Part I! Thank you for reading, this was a long one. And if you think of us, we’d love prayers for our trip, the evaluation, and for the next step for Quinn, whatever they determine that may be!