Timmy and I debated for a while about having more than one kid. Firstly because I was in school at the time and secondly because our first experience was so traumatic that we were afraid to go through that again. We couldn’t wrap our brains around doing the whole baby thing one more time. It felt scary and like the timing would never be right. Isn’t that the case for every parent?! I’m convinced it is. But after much prayer and debate we realized that our little family, which was already perfect, would be even more awesome with one more little one.

Even if it was hard. Even if it meant another scary experience. And even if it meant putting a few things on hold to complete our family. We just knew Owen was meant to be with us, and we were right.

Owen is 3 months old now and it’s been some of the hardest 3 months of my life. I’ve battled postpartum depression like I never would’ve believed. (Not ready to get into that yet but I will soon.) He is very difficult and high maintenance–he has severe acid reflux, constant digestive issues, doesn’t sleep well, and has a milk protein allergy that we are still figuring out. It’s been rough. Still worth it of course. But hard.

Even without issues like those, all newborn babies are hard! All newborns take time to adjust, and everyone has to experience a level of sleeplessness they’ve never had before. Having two kids has been both a joy and a learning experience to say the least.

I thought since my Instagram stories poll got such a big response a couple weeks back that I’d finally bring this one to the blog. 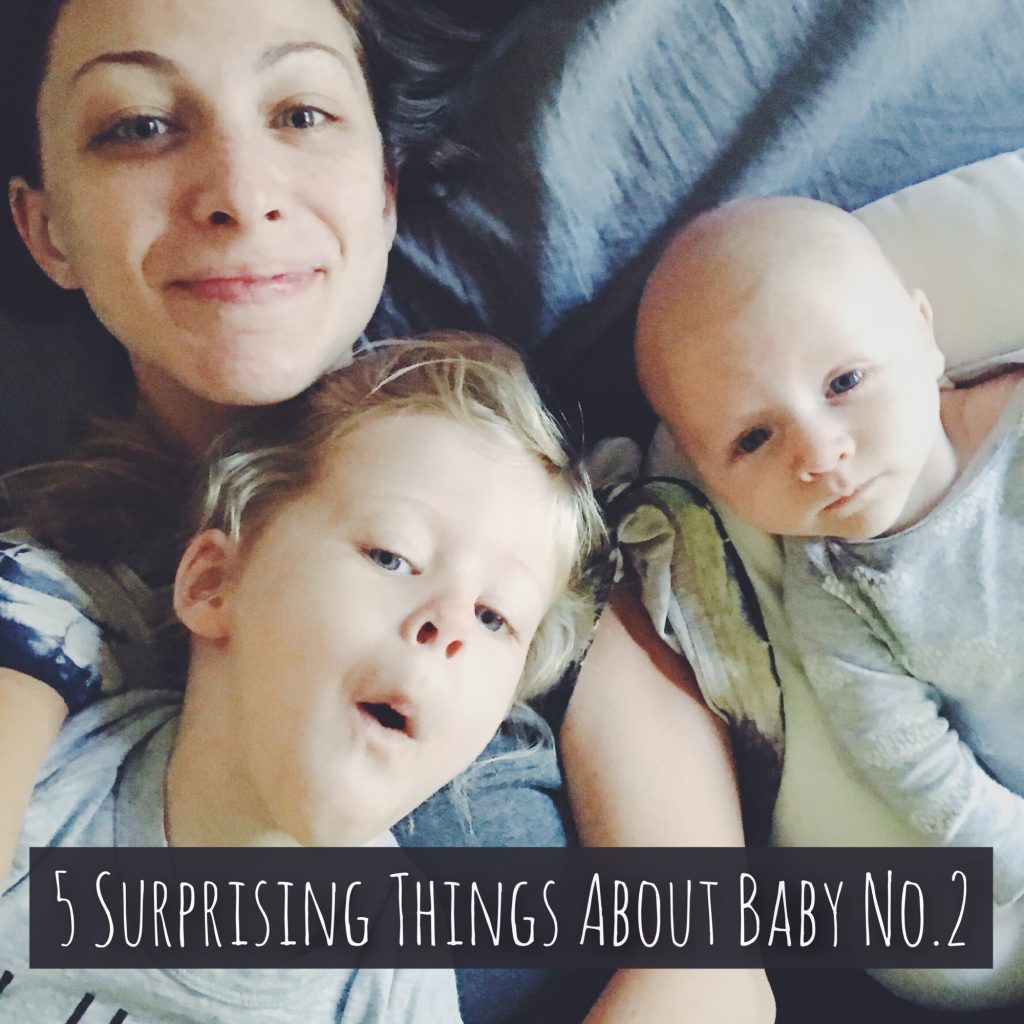 1. Your second pregnancy and newborn experience will be different than your first.
Y’all, my first kid was on her literal deathbed, and I am WAY more of a hot mess with Owen than I️ was with her haha. I did not experience Postpartum Depression after Quinn surprisingly, but almost immediately after Owen came home from the NICU I️ dealt with it majorly. I️ have a hard time even taking him in public because I️ get so anxious. The way I “schedule” him, soothe him, feed him, and interact with him is allllll very different than it was with his sister. It’s crazy. Obviously I knew they’d be two different humans with their own specific needs and personalities. But I didn’t grasp how opposite they could be! Well let me tell ya, just because everything went a certain way the first time around does NOT mean it will go that way the next time. That can be positive or negative! Just because your first child breastfed like a champ doesn’t mean your second one will. Just because your first child wasn’t a good sleeper doesn’t mean your second one won’t be excellent at it. Just because you didn’t co-sleep with the first baby doesn’t mean you won’t be all up in the second baby’s space And just because your first baby looooved that $140 Snuggapuppy swing does not mean your second one will want anything to do with that darn thing and you’re just confused about the swing’s magical powers suddenly disappearing and you’ll be all WHY WONT YOU CHILL IN THE SWING FOR ONE SECOND. I’m telling you. It will most likely not be the same experience for you!

2. It sometimes feels like I’m choosing one kid over the other. Gosh…the guilty feelings are so real with this one. During these first 3 months it’s as though I️’m always neglecting someone’s needs. Like I️’m always having to choose which child is going to get my immediate attention, to the utter dismay of the other. When both of the kids are upset at the same time I find myself trying to comfort them both together, but Quinn isn’t used to sharing those moments so it feels like I️’m failing her. But on the other hand, she has been here for 3 years. She isn’t a baby anymore whereas Owen is, and he deserves to be comforted at the level he needs to be as the actual baby. IT’S SO HARD. Feedings at the same time, getting them both dressed and out of the house, playing with the toddler while trying to feed or soothe the newborn…it’s all so much different than I expected. It’s a juggling act and I️’m really not good at it quite yet. I knew I would have to learn how to balance things more efficiently with two little minions. But I definitely did not expect such strong emotions to come from having to divide up myself and my time between them. It will not feel like this forever. I know that. But the reality of the newborn period with a second baby definitely surprised me.

3. Getting out of the house is the equivalent to running a marathon. I cannot even tell you how many days I’ve attempted to get us out of the house just to throw in the towel after what feels like wrestling alligators for an hour and flipping on Daniel Tiger instead. We’ve gone without groceries for at least a week so far. I don’t know why it feels so impossible to take both kids out on errands with me…maybe because it’s only been 3 months and the baby still seems so new and unpredictable? I don’t know. I️ have always been the mom who HAS to get out of the house at least once a day, so this new inability to get out has surprised me for sure.

4. Everyone says that the love you’ll feel watching your older child embrace the new baby is overwhelming….and it’s 100% true. I️ remember when I was pregnant multiple people told me: “Oh just wait until Quinn and Owen are together. It will melt you.” I smiled and nodded like I believed them, but I don’t think I really did. I knew it would be sweet but I had no idea how incredible it would be to see the two of them next to each other. The realization that these two babies are mine. These two babies will have each other to lean on if something tragic were to happen to Tim and me. These two beautiful babies will be able to call one another and complain about how annoying I am and how boring Dad is. These kids are each a large piece of my heart that will always live outside my body. Watching Quinn kiss her brother, talk to him, and ask to hold him just freaking killlls me. I️n the best way! The love your heart is able to hold will multiple tenfold. You worry that it won’t. You worry that you won’t be able to love another person like you love your firstborn….not true. It comes the second you see your baby, and it just grows and grows. With every sleepless hour it grows!

5. Life does not stop just because you’ve had a baby. With our first child, it felt like we lived in a newborn bubble for the first 3 months. Even though her NICU stay took up almost 10 weeks of that time, it still felt like our entire lives existed for her and her alone. With the second child: oh, not so. The second baby literally just gets thrown into your life like they’ve always been part of the show. Owen gets far less real naps in his crib or in our bed than Quinn did because we are constantly on the go. He’s always getting carted around somewhere like taking Quinn to school, picking her up, going to get groceries, or going to various appointments. We are always having to do something which means he just has to adjust. It’s SO weird, because with my first child I was very scheduled out and (for the most part) consistent. Sweet little Owen gets what he gets and I do my best haha. It’s insane how life keeps going and these babes get to come along for the ride. The tricky thing is, his personality is not very go-with-the-flow, which makes it stressful for me personally. But the surprising thing is that you find new strength and a new version of yourself to grow into when you realize you don’t really have a choice. As a mama who already has an older child, life cannot stop for the new one. It’s an adjustment for all of us, and it takes a lot of flexibility. It takes letting go of control so that the family can find its new rhythm. Letting go of control has been against my nature for the most part, and I will admit that I’ve had to face a lot of my own issues within the madness. But thankfully God is faithful, my kids are forgiving, and life goes on as we learn. OH and somehow we have all survived (GOLD STAR) and somehow we have begun to find what works for us and what doesn’t.

So those are the top 5 things that have surprised me about having a second baby.

As a closing thought I will just say that one of the most helpful things I’ve done during this new season is choose to LET GO. Let go of preconceived notions. LET GO of all expectations on myself, on big sister, on new baby, even on their dad. LET GO of the guilt. LET GO of the “supposed to” and the “by the book” rules. All that crap goes out the window now. You make decisions based on what works for YOUR family and what helps all of you function best as a unit. Even if it’s not what is typically done, you own it and do it! That’s been the most helpful thing for us.

We are still figuring it out, but in general, we have kept this in mind as we have navigated our new normal.

Questions? Comments? Stories to share? Let me know as always.

All my love.
Ansley

4 thoughts on “5 Surprising Things About Having A Second Baby”